Living in South Korea for 4 years, I maintained a steady diet that consisted primarily of barbecued pork, rice, and mountains of kimchi, along with an array of other fermented and stewed vegetables. Then I came to Canada. I swapped pork for beef, rice for bread, and kimchi for caesar salad. I wouldn’t go as far as saying it must be what it feels like going from a Thai prison diet to real food again (if what we see in the movies is to be believed), but it was a definite shock to my system.

I’ve never been a huge “red meat” eater. I grew up eating pork and chicken, and on occasion I might have had steak, but now. Wow. I eat a steak once a week minimum, along with chilli, meat sauce, etc. Which is great. I’m not complaining there. However, it’s the bread and the dried pasta that I just seem to have a problem with.

Prior to moving to Korea I had no problem eating them. But now – urgh. Everytime I eat a bowl of pasta or even a sandwich, I feel like I’ve got a pound of lead resting inside me. So I cut them out of my diet. Instead I tend to eat rice more often than not, and potatoes. However, sometimes I just get a little bored of rice (sorry Asia) and potatoes. Therefore, I had to find something different. And that something different has been quinoa.

If you have ever tried quinoa, then you’ll agree that it’s great. Especially since it tends to take on the flavor of the dish you’re making. However, I tend to find that although quinoa has been in the public domain forever, it’s still relatively “new” to most people. In fact I’d never even heard of it until I moved here, and to be honest I thought it was some kind of couscous when I first ate it. So, what is it? 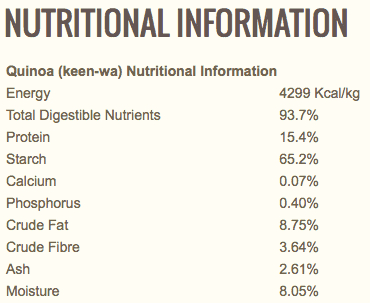 First and foremost quinoa (pronounced “keen-wa”) is a seed, NOT a grain, and is indigenous to South America. Specifically the Andes Mountains where it has been growing for centuries. However, over the past couple of years (2006 and beyond), it’s popularity in North America and Europe has soared. This is due in part to its  nutritional value and how easily it can be used in a variety of dishes, including:

Quinoa is also suitable for vegetarians, vegans, and those with gluten and wheat allergies too. So, do you really need anymore convincing why it’s awesome? Thought not. Therefore, if you haven’t already gone out and bought some (if you don’t know where to buy quinoa, I will explain where to get it from in just a moment), then I sincerely recommend you do.

The Northern Quinoa Corporation – otherwise known as NorQuin – is a Saskatoon based specialty grain and food processing company who have been growing quinoa on the Canada prairies since 1992. They have primarily been dealing with wholesale vendors, however we built them a brand new ecommerce website where they can now sell their extensive variety of quinoa and other specialty grain products directly to the consumer.

The main objective of this redesign project was to create a brand new look and feel that advertized NorQuin’s products to their distinct audiences – the wholesaler and the general consumer, as well as the ability to accept online payments. Although their previous website did advertize their products, there was no ecommerce capability meaning that when consumers came to pay, it was conducted offline and was an arduous task.

What we have created for NorQuin’s new website is a more advanced product catalog which displays their items and item descriptions in a more attractive way. This has been integrated with an easy-to-use ecommerce shopping cart so their audience is able to browse for products and then pay for these products online.

So readers why not get in contact with NorQuin and buy some of that lovely, yet nutritional quinoa that I’ve been telling you all about? Also, whilst you’re busy surfing their awesome new website, why not let us know how we did by leaving your comments below!